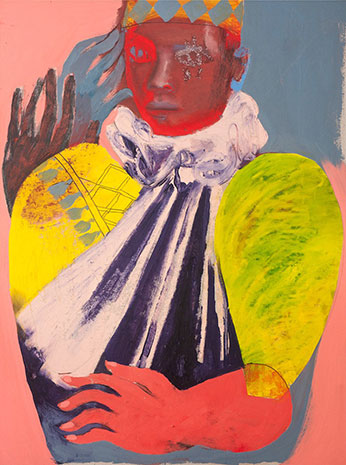 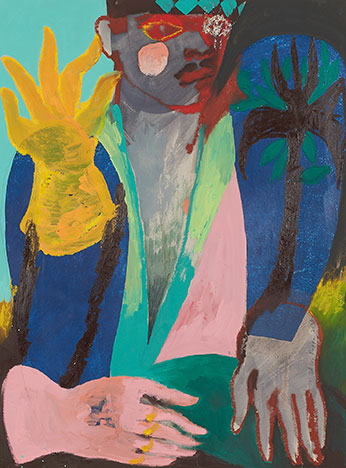 Alex Foxton’s sensual and evocative paintings, which combine memories with art historical influences such as Picasso, Matisse, Cocteau and many other modern masters, offer a freedom in the exploration of figurative male compositions. Those regal heroes could be placed at the heart of a serie of narratives about gender identity where those portraits function both as an emblem of masculine power and as an object of desire. The sexual dimension in the series Violet should be considered whereas usually it is occupied by a female’s role.

Executed with a masterful and harmonious use of colours and textures, his paintings are a combination of  paradoxes blending subtle and evocative portraits of men which is the artist’s principal theme. His skillful and instinctual colour-palette is instantly recognisable, like a DNA and provokes a contrast with the mysterious male figures he paints. Masculinity in his aesthetically artworks, is carnal and tumultuous, the expression of the male body brings us to a dialogue with shapes, expressions and colours.

The artist always paints men portraits, often semi-nude but for the series Violet  they are all dressed up in elegant costume. Their attributes and attitudes are evocative ; sword, multiplication of hands, gestures. They could represent a metaphor for a creative energy where masculine identity is fully assumed. Hidden in these ambiguous silhouettes with blurred looks and palpitating flesh, these are mysterious moments lived in tune with the elusive echo memory.

Writing about the Violet series, Foxton states : The project was inspired by a commission I had from a fashion magazine. The editor Alister Mackie gave me a lot of diverse references , some modern some old, and I mixed them with some of my own to make characters that are a mix of identities and finally have no identity. I named the series « Violet » because of this colour’s association with extravagance, the unconventional, ambiguity, individualism. It is also a traditional colour of royalty and I felt the characters were regal in their attitudes.

I was listening to Hole when I made them ; Violet is the first song on their album « Live Through This ».

Alex Foxton is a very talented artist already being collected by major international collectors and art foundations. Air Project Gallery is very proud to have spotted him in  Paris two years ago and offered him his first exhibition (Attitudes 2018).